Its done!  The contract is signed, the check was handed over, and the sold sticker got put on the plot plan. 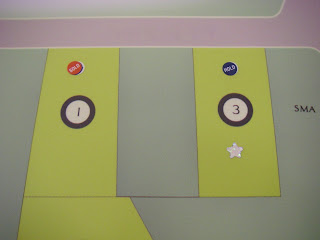 We were in the model home signing paperwork and asking questions for nearly 3 hours.  THREE HOURS.  We went over some of our choices again and stuck with most of what we had chosen originally.  As soon as I remember what they were, I'll list them.  :)

So, even after 3 hours, we aren't done yet.  We do have to set up the standard appointments with Guardian and the flooring company, but in addition, there were questions about the County disclosure form, which had changed since the last time she signed a contract.  There was a new question, and not one of us could figure out what it meant.  Once we figure it out, we'll drop off that section back to her and we'll be on our way.  I was a little disappointed that we weren't able to complete the entire process yesterday, but would rather fully understand what we are signing than rush into it.

We also didn't pick our siding and shutter colors yet.  More to come on that.  I'll need some help from the blogger world, I think....

We had made reservations at a nice restaurant to celebrate the signing of our contract, but it didn't happen.  When we came home, I took a 3 hour nap and woke up just completely drained.  Its been a hell of a week at work, at school and with the house and I was just emotionally spent.  We went out for ice cream instead.
Posted by Ravenna Ranter at 7:20 AM

Email ThisBlogThis!Share to TwitterShare to FacebookShare to Pinterest
Labels: Contract

Ravenna Ranter
I bought my first home at 22 and have lived here for almost 12 years, riding out the ups and downs of life and the real estate market. Two years ago, I met "BF" and we've been house hunting for almost a year. After looking at dozens of houses in person, and hundreds (thousands?) online, and after one failed offer, we found ourselves at the Ryan Homes model house fantasizing about building a new house. We started looking at the Venice, but eventually realized that the house we really wanted was the Ravenna. When the prices dropped 20k, and after a little nudge from BF, we signed the papers on a Ravenna, and I started this blog...