(lucky for me, I have friends in the construction industry, who were horrified that I mis-identified this excavator.  Apparently, on a back hoe, the hoe is on the back.  Who knew?) 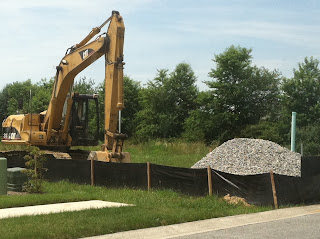 We had our pre-construction meeting today and met our PM.  He seems like a pretty competent kind of guy, but young!  Seems as if he has worked for Ryan for several years and knows his way in and out of the county code book though.  He let us know that the backhoe would start digging tomorrow (!).  And that it would finish digging tomorrow too.  Apparently, it only takes about 4 hours to dig out the foundation.   We are looking at a closing sometime in September, and he expects that our pre-drywall meeting will be in 5 weeks.

Other than that, the pre-construction meeting was pretty bland and boring.  We went over our choices, and through this giant list of specs.  The sales rep yawned.  Several times.  She must have been bored out of her gourd - she must sit through hundreds of these.  We found out where the alternative location for the microwave is (next to the fridge) and learned about some minor changes in the house design that have happened, mostly due to code changes or Energy Star certification changes.  I would have never noticed any of them, except maybe one.

The air returns will now be over each door upstairs, instead of in the ceiling.  Apparently, the cold air return is now centralized in the hallway, and because of this they have to change the locations of the returns in each bedroom.  BF and I are having a debate about this - I thought this meant there would be a vent that you could see through (and hear through!) above the door.  BF thinks it will be open only on one side and connected to duct work.  Anyone have any intel on this?  I'd really rather not have open space above the door that you could hear/see through.  What if I want to go upstairs, shut the door and scream obscenities?  If there is a hole in the door, that's not going to be such a private moment...

But regardless, I'm starting to get excited!
Posted by Ravenna Ranter at 5:47 PM

Email ThisBlogThis!Share to TwitterShare to FacebookShare to Pinterest
Labels: meetings

Ravenna Ranter
I bought my first home at 22 and have lived here for almost 12 years, riding out the ups and downs of life and the real estate market. Two years ago, I met "BF" and we've been house hunting for almost a year. After looking at dozens of houses in person, and hundreds (thousands?) online, and after one failed offer, we found ourselves at the Ryan Homes model house fantasizing about building a new house. We started looking at the Venice, but eventually realized that the house we really wanted was the Ravenna. When the prices dropped 20k, and after a little nudge from BF, we signed the papers on a Ravenna, and I started this blog...